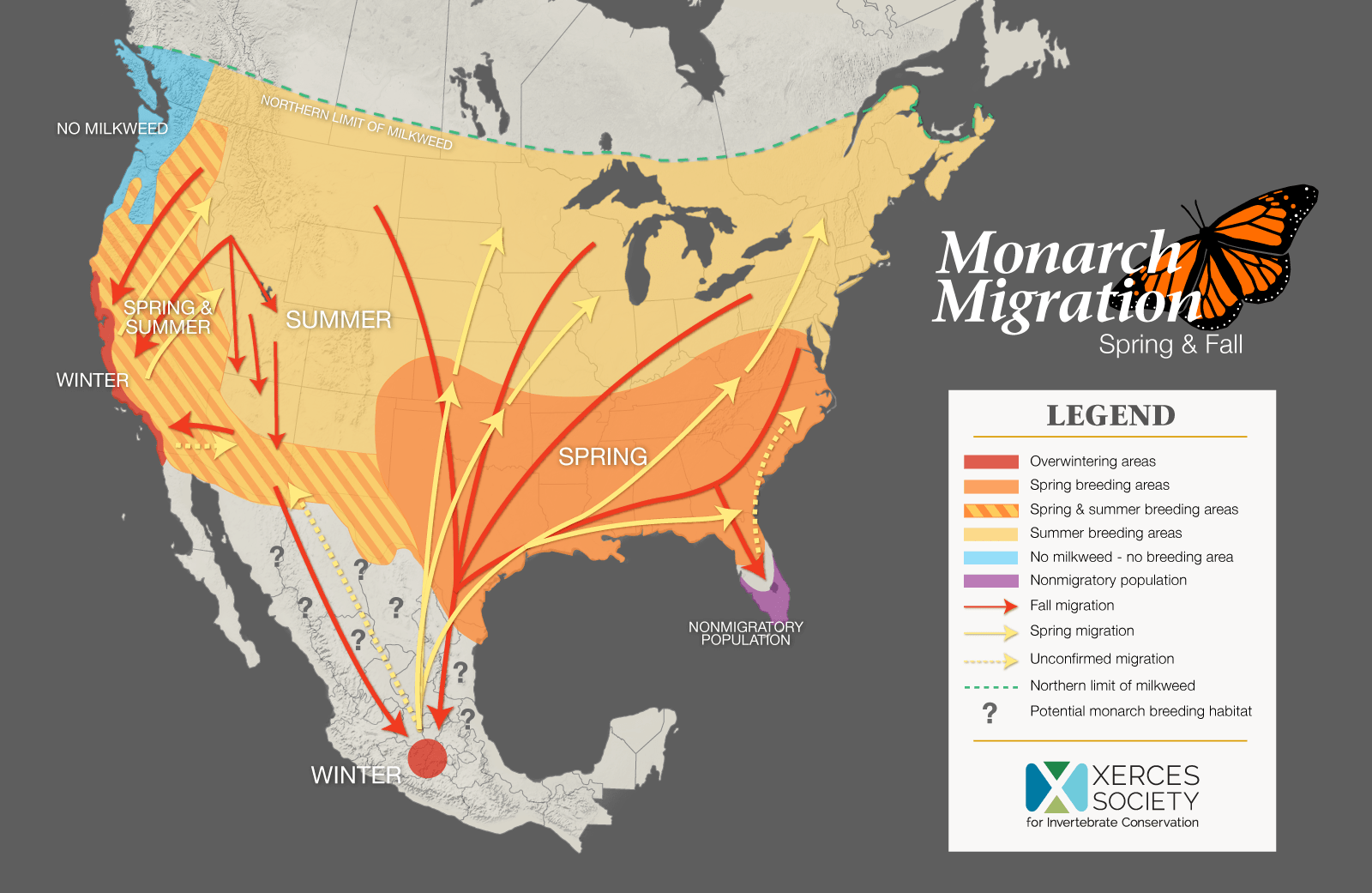 In North America, there are two distinct monarch populations that are separated by the Rocky Mountains. The western population overwinters in California, while the eastern population that we observe here in Arkansas, overwinters in high-elevation oyamel fir (Abies religiosa) forests in central Mexico. This incredible two-way migration is one of nature’s greatest phenomenon that stretches up to 3,000 miles! There is also a small non-migratory population in Florida that breeds year-round.

As the days get shorter and cooler, the monarch migration begins. Most adult monarchs live 2 to 5 weeks, but the generation that migrates to the overwintering grounds lives eight times longer and travels 10 times farther. This generation is often called the “super generation” and they are in a state called reproductive diapause. In diapause, they biologically cannot mate or lay eggs. This is significant because this biological mechanism allows them to conserve energy and live up to nine months. A supply of late blooming nectar plants are incredibly important to fuel their migration and so they can store fat for the winter.

Each winter, monarchs congregate in clusters on the Oyamel Fir trees in the Sierra Madre Mountains in Mexico. They roost at the same sites that generations before them were the year before. In the mountain tops, they have adequate shelter and temperature to survive the winter. Before beginning their journey north, they break diapause and biologically are able to mate and reproduce. All the monarchs that we will see in the coming months, will be from this “super generation” of monarchs. They begin to migrate north, laying eggs along the way on milkweed plants.

In the spring, typically around March, the overwintering generation will begin laying eggs as they head north to return to their breeding areas. This entire generation will die, but the next generation of monarchs, the “first generation”, will continue north. It will take three to four generations to reach the northern United States and southern Canada. Arkansas is an important part in the migratory flyway, so it is critical that quality habitat for monarchs. Monarch habitat includes both milkweed as a host plant for caterpillars and nectar resources for the adult butterflies.

Monarchs spend the summer breeding and mating in the northern United States and parts of southern Canada. These summer breeding grounds are important too because they will host the new generations that will eventually give birth to the “super generation” that will begin migrating south in the fall. Without habitat throughout their range, the entire population of monarchs is at risk. The Arkansas Monarch Conservation Partnership is proud to be collaborating on a national-level with other like-minded conservation partnerships, like the Monarch Joint Venture and other collaboratives, to ensure